No, the Pope is NOT the Apostle Peter’s successor.

1. There are no more Apostles, and therefore no Pope can be Peter’s successor. Only the original 12 Apostles make up the foundation of Christ’s assembly of believers.

“And the wall of the city had twelve foundation stones, and on them were the twelve names of the twelve apostles of the Lamb.” Revelation 21:14

The Apostles could do signs and wonders. The Pope can’t.

“And when he had called unto [him] his twelve disciples, he gave them power [against] unclean spirits, to cast them out, and to heal all manner of sickness and all manner of disease.” Matthew 10:1

For an in-depth look at what the Apostles could do and no one today can, please see Understanding the Duties of Ministry.

2. Peter was a poor fisherman who gave it all up to follow Jesus. Unlike the Pope he remained poor throughout his life and ministry.

However, not only does the Pope live a life of luxury, but when he travels he requires an additional boatload of money: private airplane, security guards, red carpets, hobnobbing with powerful politicians, etc.

Upside Down Crucifixion of Peter by Caravaggio

Contrast this with Peter who, with no security guards and no powerful politicians to rescue him, got crucified upside down for the Lord.

Unfortunately, this kind of high life is not exclusive to the Pope and others in the catholic church. It’s quite rampant on the protestant side as well. See Of Leaders and Servants in the Church.

3. There are no verses in the bible that bestow said title on anyone after Peter’s death, especially as Peter was not above or more important than the other Apostles.

The reason many erroneously believe that Peter was more special is because of this biblical passage:

“A third time he asked him, ‘Simon son of John, do you love me?’ Peter was hurt that Jesus asked the question a third time. He said, ‘Lord, you know everything. You know that I love you.’ Jesus said, ‘Then feed my sheep.'” John 21:17

a) Jesus asked Peter three times because Peter betrayed him three times, and that’s why Peter was hurt when Jesus insisted the third time. Peter got the hint.

” ‘Truly I tell you,’ Jesus answered, ‘this very night, before the rooster crows, you will disown me three times.’ ” Matthew 26:34

b) When Jesus asked Peter to “Feed my sheep,” the sheep He was talking about was his Hebraic fellowmen.

“First to the Judahite, then to the Gentile.” Romans 1:16

And just like Jesus sent Paul to the Gentiles, or the non-Hebrews, to spiritually feed them…

…He sent Peter primarily to the Hebrews.

c) In Jesus’s mind one group (Judahite Hebrews) was not above the other (Gentiles), as the Apostle Paul would later confirm.

It’s just that Jesus wanted to make sure the Hebrews were reached so He could shut down the Old Covenant, as He had prophesied.

In essence, from the time of Christ’s crucifixion in 30 AD to 70 AD, God gave the disobedient Hebrews 40 years to repent and accept Jesus as the Messiah.

“The Lord is not slow about His promise, as some count slowness, but is patient toward you, not wishing for any to perish but for all to come to repentance.” 2 Peter 3:9

But, in 70 AD, after waiting 40 years, God dropped the hammer on all those who did not repent. He dispatched the Roman Army to Jerusalem to wipe out all the Hebrews who had come up from all the country and the world to the feast of unleavened bread.

Just like during Ancient Israel’s 40-year wilderness wandering, God was not about to lead the unbelieving Hebrews into the promised land of the New Covenant. They all had to die so He could start anew. Discover the Sequence of Events here. 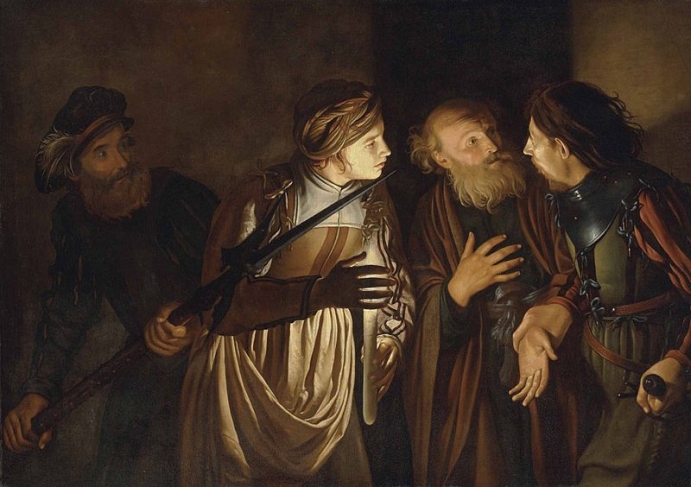 The Denial of St Peter by Adam de Coster

4. That misunderstanding about the Pope being Peter’s successor really took wings with a Bad Translation from the Greek in Matthew 16:18.

“And I say also unto thee, That thou art Peter, and upon this rock I will build my church; and the gates of hell shall not prevail against it.” KJV

“And I say also unto you, you are a piece of rock, but upon this mass of rock I will build my assembly; and the gates of hell will not prevail against it.”

In the popular translation, the Greek word that is translated as Peter is petros and it means a piece of rock. Besides, Jesus never called Simon Peter, He always called him Simon Bar-Jona (or Simon son of John).

After this incident, Simon Bar-Jona either got stuck with the nickname Petros or Peter, or adopted it as his “Christian” name a la Saul-became-Paul. And even though verse 16 (amongst many others) says, “And Simon Peter said,” one must keep in mind that Matthew was narrating this after the fact.

Further, the Greek word that is translated as rock is petra. It means a mass of rock.

Jesus would have never thought of building His church or assembly solely on a sinful man like Peter. It would have been faulty construction.

The foundational cornerstone of the assembly is Jesus Himself, the great rock:

“Christ Jesus himself as the chief cornerstone.” Ephesians 2:20

“Anyone who falls on this stone will be broken to pieces; anyone on whom it falls will be crushed.” Matthew 21:44

However, Peter and the other Apostles also make up the foundation of the assembly.

“(you are) built on the foundation of the apostles and prophets, with Christ Jesus himself as the chief cornerstone.” Ephesians 2:20

That’s why Jesus called Simon Bar-Jona a piece of that mass of rock, with the other Apostles being the remainder pieces.

When Jesus mentioned the mass of rock he was pointing toward a certain direction by using the word tautes  (translated as this in this rock). It actually means this hereof. It is a directional word with a particular slant. And that slant was not just toward Peter since Jesus used two different expressions for rock. It was directed at Jesus Himself and at the Apostles, as the word mass means aggregate or conglomeration or whole. Again, Peter was only a piece of this mass of rock or this mass quantity of rock.

Last, the Greek word that is translated as and is kai. It has a slew of meanings: and, but, also, then, even, etc. Therefore, context is key. Jesus was telling Simon (Peter) that he was not the only one he was relying on, and that He Himself and the other Apostles were part of the mass of rock upon which the foundation of the assembly would be laid. That’s why but is the appropriate translation.

By using and instead of but the translators of the popular version made a connection between the two types of rock as if they were both one and the same.

That fallacy led to the Papal system inside the Catholic church, or at the very least is being used to explain it, especially as Catholic scholars strangely and erroneously consider the Pope to be Peter’s successor – a bizarre understanding with no biblical verses to prove it.

In fact, immediately following verse 18 Jesus promised all of the Disciples/Apostles (or the mass of rock) that He would give them authority and power.

God has not placed anyone above his flock, except Jesus Christ.

“But I want you to understand that the head of every man is Christ…” 1 Corinthians 11:3

END_OF_DOCUMENT_TOKEN_TO_BE_REPLACED

VIEWS OF NEWS: Is War With Iran Coming?