To Create A Borderless Utopia

Countries are constructs designed to better manage man’s affairs, and not to separate mankind and pit people against people; and no one, except God, owns these countries because no human created the earth.

“The earth is the Lord‘s, and the fullness thereof; the world, and they that dwell therein.” Psalm 24:1

Even with their imaginary borders, countries are not delineated to be the exclusive domains of specific groups or races.

That is why God is constantly stirring the pot.

It is true that if God wanted countries to have immovable borders, He would have carved them into the earth for all to see. But He didn’t.

Countries have no divinely carved borders

It is also true that nation-states are a fairly new concept. They were engineered by European powers to facilitate the reining in of their own territories and Empires. Prior to that mostly city-states existed, and people freely moved about from one city-state to the next.

It is also very true that today things are quite different. We have now more people alive than at any other time in history – billions of people to be exact. Imagine thousands upon thousands of people marching from one country to another. The result would be quite chaotic for the region being invaded.

Therefore, a certain type of border control in every nation is desirable until every country is economically self-sustainable and at peace. Once that happens everyone’s borders would be quiet, except for the normal flow of businessmen and tourists.

We can even envision a time when the great flow of earthlings will no longer require visas or passports, because no one will be afraid of foreigners anymore since every country’s economy will be doing peachy (funny how people allow money to change their perspective).

In turn, this will bring about a global fraternity of fellow men: one that could possibly engender a world with no countries, no borders, and no oppressive and ineffective central governments, just local governing councils.

Humanity will then become ONE nation again, just like it was before God divided it into many nations at the Tower of Babel; this time employing Jesus as the catalyst for this borderless reunion.

Still, that doesn’t mean God is getting rid of the various cultures and races – though if He decided to do so, it would be His prerogative. In essence, all it truly means is that God is uniting mankind through love and brotherhood, using Jesus our Lord.

Consequently, a xenophobic and bigoted control of any country’s current borders, which removes all trace of human and Christian compassion, is to be rejected. Such control is callous and turns those who enforce it into beasts.

“‘Cursed be anyone who perverts the justice due to the sojourner…’” Deuteronomy 27:19

Imagine for a moment that Jacob and his eleven sons were denied entry into Egypt, as they sought to survive the seven-year famine. Imagine also that Jesus, Mary, and Joseph, as they fled Herod’s wrath in Judah, were turned away at the border of Egypt.

Unimaginable, isn’t it? If they were hindered, it would have been heartless.

In all things there must be balance.

As a community, as a country, as a world we must decide how far we are willing to go to impede the migrating tide of our fellow men.

While mulling over so fateful a decision, we should keep this in mind: we don’t own this earth, we don’t own anything. Let’s not act as if we’re God, and as if everything around us is to satisfy our own selfish ambitions.

The whole of earth is for all of mankind.

So let us use wisdom when deciding on things that will affect others, because one day, instead of them being the migrants, it could be us or our children.

In general, no one really wants to leave their home country, unless they are forced to do so either for political (war included) or economic reasons. Therefore, in order for every country’s borders to be at peace, mostly two things are needed.

First, all current superpowers, such as the US Federal Government, need to stop meddling in other people’s countries. A few examples:

1. Whenever the US Empire props up a foreign dictator that is oppressing its populace, no one should be surprised when people from that dictator’s country scurry over to the US. Remember the deluge of Haitian and Cuban boat people? Well, the US supported both Duvalier and Batista and imposed an embargo on Fidel Castro’s Cuba.

2. The US Empire also helped fix the Mexican elections against the populist Andres Manuel Lopes Obrador in July 2006, because they wanted to keep the oil safe for American interests by stopping another Hugo Chavez type.

Likewise, the US “Justice” Department activated their Fast & Furious operation, which had the corrupt DEA selling powerful weapons to drug cartels on the Mexican border. Yes, you read right. The US government was doing business with drug dealers and murderers, but as always they had an excuse: it was a sting operation, they said. The perfect lie since no one in these cartels got arrested.

Still, many Mexican border towns became ghost towns because of these cartels and their collusion with governments on both sides of the border.

“In the abandoned and burned-out remains of Guadalupe (town), former residents see a scorched-earth policy: The state colluded with capitalists and criminals, they say, to empty the area of both residents and industry so that large binational groups could swoop in and develop huge infrastructure projects on valuable borderlands rich in natural resources,” reported Aljazeera.

Where do you think the people of these abandoned towns went? 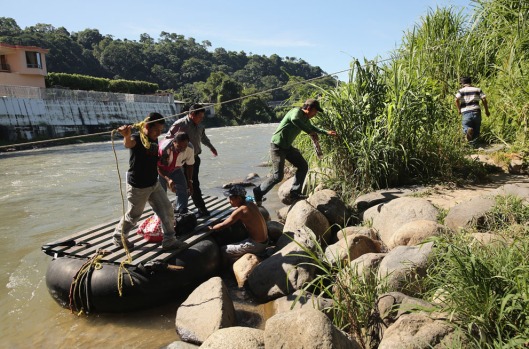 3. When France’s African Empire collapsed, its oppressed people were left in abject misery after decades of subjugation. So tens of thousands packed up and left for France. Where else were they supposed to go? They spoke French now.

4. The US and its allies in Europe, wagged by the monstrous state of Israel, are currently destroying Syria (and most of the Middle East) with terrorist groups they finance. Why? To benefit Israel. After years of war in which 300,000 Syrians have been killed and wounded, with millions either displaced or refugees, Syrian emigrants made their way inside Europe and caused massive jitters throughout the West. Seriously, what did they expect?

Second, instead of casting stones rich countries should genuinely help poor countries in their struggle, and not take advantage of them via thieving and warmongering organizations such as World Bank, WTO, IMF, NATO, Pentagon, etc.

“The IMF and World Bank have for decades pushed a policy agenda based on cuts to public services, increases in taxes paid by the poorest and moves to undermine labour rights and protections,” writes Colin Todhunter. “IMF ‘structural adjustment’ policies have resulted in 52% of Africans lacking access to healthcare and 83% having no safety nets to fall back on if they lose their job or become sick. Even the IMF has shown that neoliberal policies fuel poverty and inequality.”

Therefore, these predators are choking the very life out of underdeveloped nations: with their usurious system they impose harsh conditions that are unrealistic and difficult to meet, while the other groups sneak in their imperialistic and militaristic agendas via bias trade agreements, skewed foreign policies, and occupation-style military bases.

These money and power-hungry wolves are willfully undermining these countries and holding them back from the very progress they seek.

If true and constructive help is provided, without meddling in these poor nations’ internal affairs, then illegals and refugees – economic or otherwise – could become a thing of the past.

The foreigner brings to a land a fresh pair of eyes, which allows him to see things in a whole new light. Therefore he can either be a force for positive change if he’s welcomed or for evil if he’s persecuted.

The United States of America, known as The Melting Pot, is the land of foreigners. It is also God’s laboratory, whereby He is demonstrating and proving to the naysayers the feasibility of a unified brotherhood of diverse races.

It welcomes the downtrodden, the poor, and the tired from all over the world without regard to race or religion, and gives them the freedom and opportunity to prosper.

It is a Christ-inspired act of kindness and love that is matched by no other country on earth. An act that is predominantly responsible for the USA’s greatness and for its numerous and dazzling innovations that immensely benefit mankind.

Thus those rejected as the rabble of the world become the lowly that God lifts up.

“The lowly He sets on high, and those who mourn are lifted to safety.” Job 5:11

Imagine then what the countries of the world would look like if they followed the USA’s example. Imagine also what the world itself could be like if it became borderless.

Meanwhile, let us not despise the foreigners who come knocking at our borders, while caring for and doing unto them what we’d like them to do unto us; especially since we are all descendants of our forefather Adam and his wife Eve, hence one family.

Reinventing The Concept Of Empire

The Empires of old usually revolved around their city-states, given that in those days mostly city-states existed. They were entities that forced themselves on other Kingdoms usually of different races and nationalities, and were more interested in tributes/taxes that these Kingdoms could provide the Emperor, not so much in territory per se. The whole idea of these Empires was to collect revenue – that’s why their tributaries were called vassal states.

The modern European powers reconfigured the way Empires work. They invaded other Kingdoms in order to pillage the resources of those they conquered. So land and territory mattered. After all, no one knows what’s hidden beneath even the most god-forsaken land. Thus, better grab as much land as possible and expand the conquered Kingdoms’ territories.

The USA further reconfigured the way Empires work. The US Empire bribes the governments of other countries – using “Foreign Aid” – to maintain the hegemony of the US Dollar, and pillage the resources of these nations through the infiltration of American companies and the intimidation of US military bases. In other words, the Jewish Oligarchic Elite, as the “Emperor,” wags the US Empire for its own benefit.

Read also: Are Jews the Israelites of the Bible?

11 thoughts on “Stirring The Immigration Pot”