Life, Death, And The Afterlife 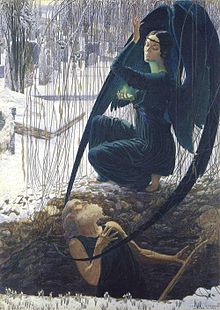 Are you afraid of death?

Think about this. You did not give Life to yourself. How you grew in the womb is a mystery, even to scientists. Sure, they can explain it in terms of biology, but can they replicate it in a lab without using the materials (DNA, sperm, eggs, etc.) that God provided?

Even if they could, would their creation have Life? That’s the crux. How on earth do Life and physical growth really occur together in the womb?

“For you formed my inward parts; you knitted me together in my mother’s womb.” Psalms 139:13

When you die Life leaves your body, but your body remains and immediately starts to decay. The body is there, but there’s no Life.

Whether big or small as a fetus, the body is distinct from Life. Life gives life to a body of any size. The One who puts Life in your body removes it upon the death of the body – whether that death is natural or induced.

Who puts Life there? God. Where does that Life go upon death? Back to God.

“…and the dust returns to the ground it came from, and the spirit returns to God who gave it.” Ecclesiastes 12:7

Then God is the one you’ll be seeing after you die. Because the Life that leaves your body upon death is YOU. The real YOU. Complete with the good and the bad. All engraved in YOU.

“We are confident, I say, and willing rather to be absent from the body, and to be present with the Lord.” 2 Corinthians 5:8

The Way To Eternal Life

Ask yourself these fundamental questions.

Can a sinful person stand in front of a sinless God? Can an imperfect man stand in the presence of a perfect Creator?

On your own you can’t do it: a sure recipe for eternal death (aka Hell).

“For all have sinned and fall short of the glory of God…” Romans 3:23

“He will say… ‘Depart from me, you who are cursed, into the eternal fire prepared for the devil and his angels.’ ” Matthew 25:41

But with Christ you can. Yes, you can.

“For God so loved the world that he gave his one and only Son, that whoever believes in him shall not perish but have eternal life.” John 3:16

When you accept Christ’s sacrifice on the cross, His blood washes you clean.

” ‘Come now, let us settle the matter,’ says the LORD. ‘Though your sins are like scarlet, they shall be as white as snow; though they are red as crimson, they shall be like wool.’ ” Isaiah 1:18

“For this is my blood of the new covenant, which is shed for many for the remission of sins.” Matthew 26:28

“If Christ is in you, though the body is dead because of sin, yet the spirit is alive because of righteousness.” Romans 8:10

Consequently, the process of salvation is in Christ Jesus, our Lord.

1) True Christians, who follow God’s commandments, go to be with the Lord when they die.

“We are confident, I say, and willing rather to be absent from the body, and to be present with the Lord.” 2 Corinthians 5:8

“Blessed and holy are those who share in the first resurrection! The second death [or eternal hell] has no power over them, but they will be priests of God and of Christ, and will reign with Him for a thousand years.” Revelation 20:6

“For every beast of the forest is Mine, The cattle on a thousand hills.” Psalms 50:10

The word thousand in these instances means many or a great amount. The cattle on the thousand and first and second and third hills do not belong to someone else, they still belong to God.

With that same understanding, Christ is now reigning over the earth through the New Order or the New Covenant, and no one but God knows when that unlimited period will end.

2) Those who are NOT Christians are dead in spirit.

“The Spirit [of Christ] gives life because of righteousness.” Romans 8:10

The dead in spirit are placed in a holding pattern after their physical death, not in purgatory. They await Judgment Day which will come about following the thousand-year reign of Christ and the end of the world.

“They [Christians] came to life [in heaven] and reigned with Christ for a thousand years. The rest of the dead [non-Christians] did not come to life until the thousand years were completed…The dead [non-Christians] were judged according to what they had done as recorded in the books… Anyone whose name was not found written in the Lamb’s Book of Life [Jesus’s Book of Life] was thrown into the lake of fire.” Revelation 20:4,5,12,15

“I saw the Holy City, the new Jerusalem [the Assembly of all Christians], coming down out of heaven from God, prepared as a bride beautifully dressed for her Husband [Jesus].  And I heard a loud voice from the throne saying, ‘Look! God’s dwelling place is now among the people, and he will dwell with them. They will be his people, and God himself will be with them and be their God.’ ” Revelation 21:2-3

“Then we [Christians] who are alive and remain will be caught up together with them in the clouds to meet the Lord in the air, and so we shall always be with the Lord.” 1 Thessalonians 4:17

Does that mean every non-Christian will be thrown in the eternal fires of hell? We don’t think so, otherwise God would not have planned to waste His time judging the incredibly vast multitude that will appear before Him.

a. Jesus died to be the Savior of the whole world.

“We have put our hope in the living God, who is the Savior of all people, and especially of those who believe.” 1 Timothy 4:10

“In Him was life, and that life was the light of all mankind.” John 1:4

b. Because Christ is the light of all mankind, every non-Christian will have a chance to stand before Him and give an account of his life.

“No one comes to the Father except through me.” John 14:6

Thus, Christ will judge all non-Christians according to their deeds and the opportunities given them to live for Him, and will punish those whom He decides deserve punishment.

Those non-Christians, whom Jesus will show mercy to, would have displayed in their earthly lives – just like true Christians – the fruit of the Spirit.

“He will render to every man according to his works: to those who by patience in well-doing seek for glory and honor and immortality, he will give eternal life; but for those who are self-seeking and do not obey the truth, but obey unrighteousness, there will be wrath and fury.” Romans 2:6-8

“For it is not the hearers of the law who are righteous before God, but the doers of the law who will be justified.  (Indeed, when Gentiles, who do not have the law, do by nature things required by the law, they are a law for themselves, even though they do not have the law. They show that the requirements of the law are written on their hearts, their consciences also bearing witness, and their thoughts sometimes accusing them and at other times even defending them.) This will take place on the day when God judges people’s secrets through Jesus Christ, as my gospel declares.” Romans 2:13-16

“The fruit of the Spirit is love, joy, peace, patience, kindness, goodness, faithfulness, gentleness, and self-control; against such things there is no law.” Galatians 5:22-23

c. True Christians who follow Christ’s commandments will escape Judgment of Condemnation. That’s the beauty of being a true Christian. Forgiveness is asked by the Christian, and then granted by God while the Christian is still alive, repentant, and living for Christ; hence there’s no sweating before the Throne of God on Judgment Day, only a welcome hug from the Creator Himself.

Still, the many so-called Christians who don’t really live the Christian life will not escape Judgment of Condemnation.

“For we must all appear before the judgment seat of Christ, so that each one may receive what is due for what he has done in the body, whether good or evil.” 2 Corinthians 5:10

If you’re a non-Christian or a “marginal” one, don’t bet your eternal destiny on what you think you can get away with on that fateful Judgment Day. Frankly speaking, the odds are stacked against you.

“Whoever believes in the Son has eternal life; whoever does not obey the Son shall not see life, but the wrath of God remains on him.” John 3:36

Following Judgment Day, Christ will start everything over.

“Then I saw a new heaven and a new earth; for the first heaven and the first earth passed away, and there is no longer any sea.” Revelation 21:1

No longer any sea is symbolic for no longer any abyss, the pit wherefrom came the demons.

“The dragon stood on the shore of the sea. And I saw a beast coming out of the sea.” Revelation 13:1

Therefore, there will be no more demonic and destructive forces in the new earth to contend with.

“Blessed are the meek, for they will inherit the earth.” Matthew 5:5

However, even now, subsequent to Satan’s crushing defeat, a certain manifestation of the new Heaven and the new Earth, in preparation for their prophesied upcoming transformation, is already being exhibited: the Earth is now under new management, with Jesus reigning over it in Heaven through his new chosen people, true Christians, who daily do His heavenly will on earth.

“Great and marvelous are Your works, O Lord God, the Almighty; Righteous and true are Your ways, King of the nations!” Revelation 14:3

Bringing His dominion to bear, Christ is at work, preparing and PERFECTING a special group of people, His chosen, a multitude from every generation and every nation under heaven that will inherit the New PERFECT Earth He will bring forth, along with their New PERFECT Heavenly Bodies.

“I looked, and behold, a great multitude which no one could count, from every nation and all tribes and peoples and tongues, standing before the throne and before the Lamb, clothed in white robes, and palm branches were in their hands.” Revelation 7:9

The real reason people fear their death is because of the second death (or eternal death/hell). They quite presciently feel that it is there and waiting.

Read also: Predestination and Free Will

6 thoughts on “Life, Death, And The Afterlife”

VIEWS OF NEWS: Is War With Iran Coming?